Legless with hopes of unity in the afterlife !!!

Legless with hopes of unity in the afterlife !!!

Whilst searching through the West Derby Cemetery records for family members, a colleague came across the burial record of an amputated leg.

We all found this strangely fascinating, but on talking to another colleague we found that he knew of yet another amputated leg buried this time in Anfield Cemetery, which he said was mentioned as one of the stories on the Cemetery Tours.

This piqued our interest and we decided to look into both burials, especially the one at Anfield to see if the stories surrounding the burial were true and to see if his wishes were carried out.

As is often the case, the facts beggar belief, when we were told that, “a man had purchased a grave and had a burial service for his amputated leg”, I guess he hoped to get it back in the afterlife following his eventual death when he planned to be buried in the same grave. 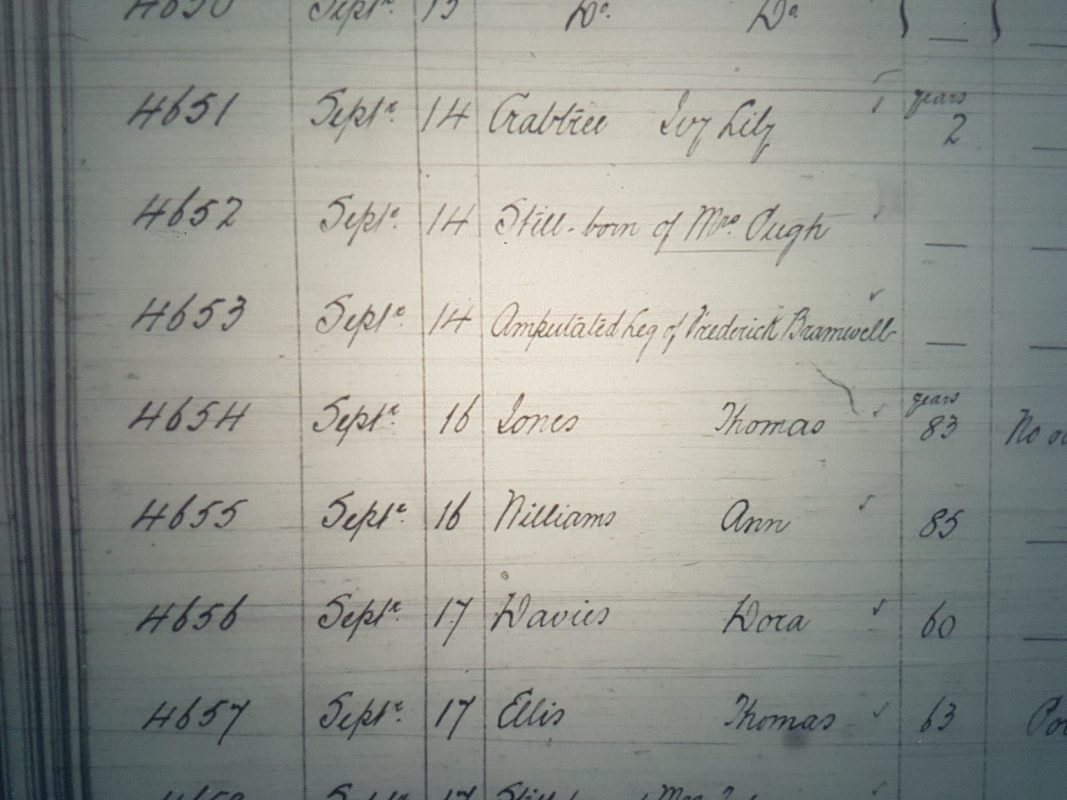 All we were given by our colleague was a photograph of a snippet from a burial record ?

With no more than a partial copy of the burial record for the “amputated leg of Frederick Bramwell” we went to work trying to find out more about the owner and how his leg came to be buried.

Following some extensive detective work we finally discovered that the owner was in fact one John Frederick Bramwell.

He was born 9 September 1858 in Preston, Lancashire, he was baptised at St John’s Church, Preston.

John lived his formative life in Preston and the 1st record we have found of him living in Liverpool is on the eve of his wedding, he was living on Duke Street, Liverpool, where his occupation was listed as a warehouse clerk.

In the 1901 census we find John, his wife and 3 sons are now living in the Durning Hotel located at 2 Durning Road, Liverpool, where he is now working as a Licensed Victualler.

Although we haven’t been able to find the cause of John’s Gangrene, his leg was amputated on 12 September 1909, possibly at the Fazakerley Hospital, Liverpool, due to its proximity to the cemetery.

His leg was then buried in West Derby Cemetery, Lower House Lane, Liverpool, in a Public Grave on 14 September 1909. We believe the leg was buried by the Hospital but have not been able to confirm this.

Sadly although John’s leg was amputated, in an attempt to save the Gangrene and infection spreading throughout his body, he subsequently died on 17 September 1909 and was buried in a Private Grave in Toxteth Park Cemetery, Smithdown Road, Toxteth Park, Liverpool.

The cause of his death was listed as Gangrene with the secondary cause being Exhaustion.

John was reunited with his wife, on 26 September 1947, but unfortunately not his leg. 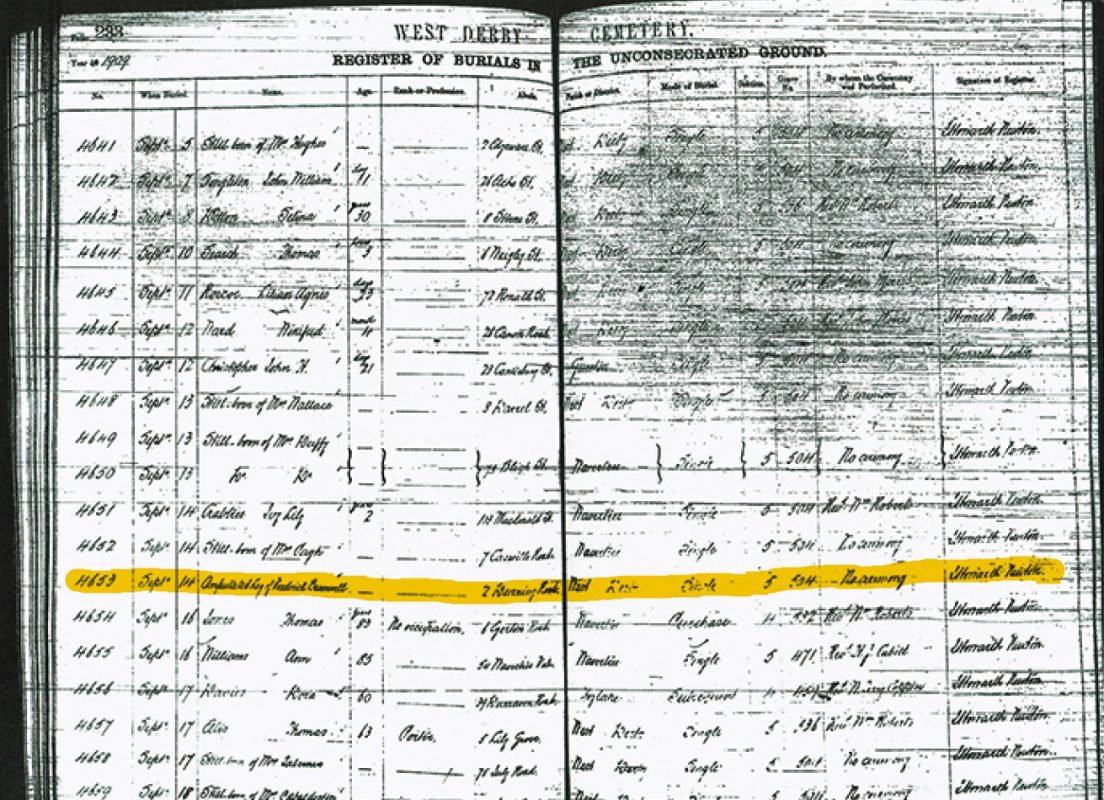 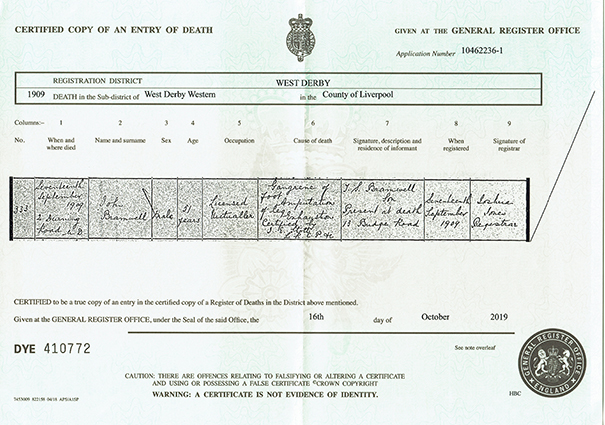 Our 2nd piece of Research starts with a story: –

One of our colleagues who lived adjacent to the Anfield cemetery and specialised in finding graves, records and other anomalies about people buried there as well as other local stories from around the Liverpool area, he had mentioned the tours led by members of the Friends of Anfield Cemetery Group.

These are Guided Tours that take place around Anfield Cemetery, Liverpool, pointing out and telling tales of the many fascinating graves and people buried in them.

This particular story of John Bennett Evans is that when he had his leg amputated, he wanted to be reunited with it when he died, therefor he purchased a Private Grave so that his wish would be carried out.

This was so intriguing, but just how true was the story?

More importantly was he reunited with his leg as he wanted?

The man in this bizarre story.

John Bennett Evans was born in Pwllheli, Wales in 1857.

He was married on the 28 July 1880 at St Michael in the Hamlet Church, Aigburth, Liverpool. On his Marriage Certificate he was living in Northumberland Terrace, Everton, Liverpool.

From 1887 John was living at 3 Elm Bank, Walton Breck Road, Everton, Liverpool with his wife & 6 children.

On the 3 July 1889, John had to have his leg amputated, we DO NOT know if the reason for the amputation was through ill health or due to an accident.

His leg was buried on the 5 July 1889 in a Grave in Anfield Cemetery, 236 Priory Road, Anfield, Liverpool.

We were pleased to find him on the 1891 and 1901 Census’ where he was classed as living on his own means.

Fortunately for him and his family he had survived the trauma of loosing his leg and was able to move to Elm Bank, Stanley Avenue, Wallasey, Cheshire.

In the 1911 Census he was still living at Elm Bank, Wallasey together with his wife and 3 children and he was classed as a House and Landowner.

By 1914 he was recorded as living at 9 Stratton Avenue, Liscard, Cheshire this was found on one of his sons’ Military Enlistment Form’s.

John died on 25 June 1920 and was buried in Wallasey (Rake Lane) Cemetery, Wallasey, Cheshire, he is buried with his wife and 1 daughter. The family have had an inscription for a 2nd daughter who died in America added to the Headstone. 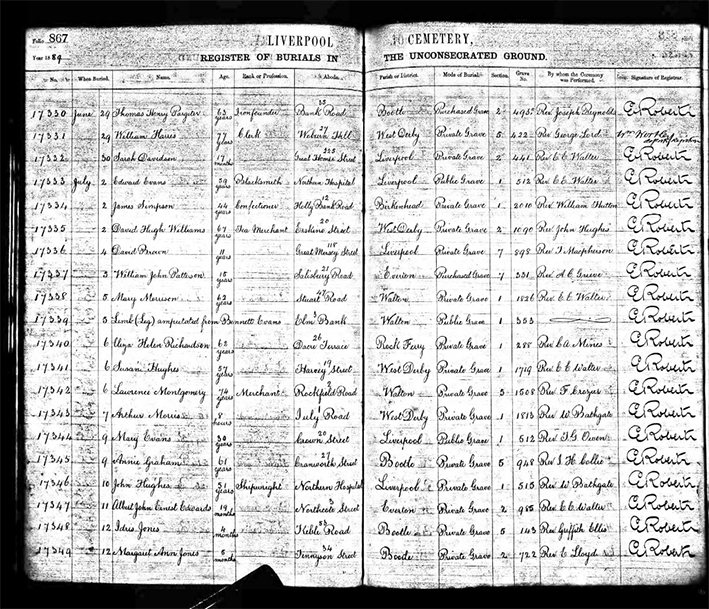 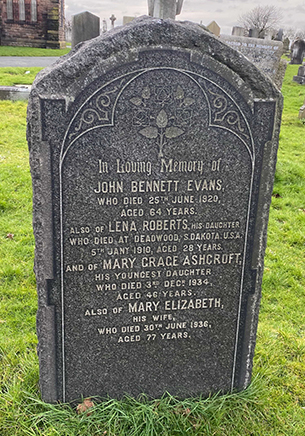 The answer to our story is NO he never purchased a grave in Anfield Cemetery, as his leg was buried as the last item of 12 in a Public Grave, therefore he was never reunited with his leg.

But more importantly he was reunited with members of his family.

So sadly in neither of these strange cases of  Legless Men were they reunited with their amputated legs on earth, but hopefully they were in the afterlife ?

We have also had services for other body parts that have been buried ahead of their owners remains, arms, feet etc.

We have even found records of family pets being buried along with their owners !

A project for the future ?

Were were recently told yet another strange a story, that back in the mid 1940’s in one of Liverpool’s many Court, Housing complexes, a policeman stopped a group of young boys who were kicking about a scruffy looking ball shaped object, when he went to pick it up, he discovered it was a human head, complete with hair, and skin !!!